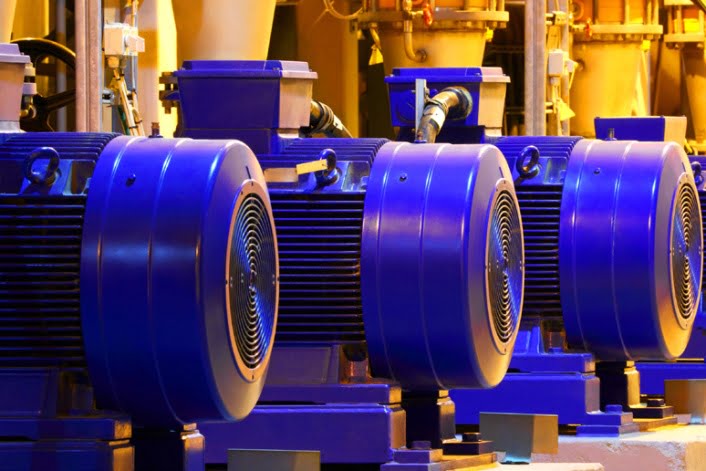 It’s almost impossible to think of a business that doesn’t use electric motors. In industry, they power the manufacturing processes, and in virtually every commercial building they drive the systems that provide a comfortable working environment. Motors also use a lot of energy. According to the Carbon Trust, a 2.2 kW motor typically costs around £2,300 a year to run. This makes energy efficiency of motors a key concern for every business owner and manager, says Julian Grant of Chauvin Arnoux.

It’s widely reported that motors consume around half of all electricity used worldwide, and that they account for more than two-thirds of the electricity consumed by industry. The actual figures vary a little according to the source, but that really doesn’t matter. The take-home lesson is that, whatever business you happen to be in, you’re almost certain to be spending a lot of money on electricity to power your motors and, in addition, the energy they consume is adding to your carbon footprint. These are two excellent reasons to look at motor efficiency, but how do you go about it?

Paradoxically, the first step doesn’t even involve identifying the individual motors on your site. Instead, it’s to monitor the electrical supply, ideally using a portable energy logger (PEL). Two important things to look for are voltage imbalance between the phases and poor power factor. A voltage imbalance of just a few percent will reduce the efficiency of every motor on your site, so it’s well worth identifying and correcting. The corrective action may, for example, involve redistributing single-phase loads between the phases so that the phases are loaded more equally.

If a site has a poor power factor, relatively inexpensive equipment can be installed to bring it nearer to 1.0 and cut energy costs. Power factor correction can also be provided for individual motors, although this is usually only worthwhile with large motors, and for groups of motors that usually operate at the same time.

With phase imbalance and power factor out of the way, it’s now time to look at the energy saving opportunities associated with individual motors. Start with your biggest motors first, because this is where you’re likely to be able to make the biggest savings. It will often be worth installing a PEL either temporarily or permanently, as this will provide a lot of useful information. The log will, for example, show exactly when the motor was running, which is important because a good way to waste energy is to leave the motor running when it’s not needed – during tea and lunch breaks, for example.

Data from the PEL will also let you work out whether the motor is oversized. This is a significant issue because the efficiency of a standard induction motors falls as the load on it decreases and, below about 50% of its maximum loading, its efficiency will be decidedly poor. So, if the log reveals that the motor spends its whole life lightly loaded, it might pay for you to fit a smaller replacement.

The PEL, particularly if you leave it in place for a while, will additionally provide you with invaluable baseline data about the power consumed by the motor, which you can later compare with the consumption after you’ve made improvements to make sure that you’re achieving the gains you expected.

Next, look closely at how the motor is controlled. If it has simple start-stop control – that is, it’s either running at full speed or stopped – you may well be able to make big savings by fitting a variable speed drive (VSD), especially if the motor is driving a fan or a pump.

Fan and pump systems have to be designed to cope with worst-case conditions. A fan in a building climate-control application must, for example, be able to move enough air to keep the building cool on the hottest day of the year. On every other day of the year, it is shifting too much air and so throttles and dampers are included in the system to reduce the airflow. But with simple start-stop control, the motor still runs at full speed using just as much energy on a cool day as it does on the hottest day!

A much better solution is to fit a VSD so that the speed of the fan is automatically adjusted to give the actual airflow required at any particular time. Assume that this means the fan runs at 80% of full speed for most of the time (which is by no means unusual), the energy it uses is reduced by 50%. Even if it’s only that 2.2 kW motor mentioned in the introduction, this is a saving in energy costs of over £1,000 per year, so the cost of fitting the VSD will be very soon recovered.

In fact, for those who act quickly, there is even a government incentive for fitting approved VSDs. This is the Enhanced Capital Allowance (ECA) scheme that allows the whole cost of purchasing and installing the VSD to be offset against corporation tax in the year that the work was carried out. Fast action is need, however, as the scheme ends for new product purchases from April 2020. You’ll find more details on the website of the Department for Business, Energy and Industrial Strategy.

There’s just space left for a few words about intrinsic motor efficiency. Motor efficiency is classified in line with the IEC 60034-30 standard that was introduced in 2008 and updated in 2014 as IEC 60034-30-1. The motor efficiency classes are designated IE1, IE2, IE3, IE4 and IE5, with IE1 the least efficient and IE5 the most efficient. All AC induction motors placed on the market in the EU since January 1 2017 have had to either meet the requirements of IE3, or of IE2 if they are equipped with a VSD.

The motors you already have may be in a lower category, so is it worth replacing them? The answer is almost certainly no. The more efficient motor will cut your energy bills, of course, but probably not by enough to offset the cost of the new motor over a realistic timescale. The situation is somewhat different, however, when a larger motor has failed, and the choice is between having it rewound and replacing it. Each case will need to be decided on its merits, but in these circumstances, installation of a new high-efficiency motor may well be justified. It’s worth noting that such a replacement may be covered by the ECA scheme discussed in relation to VSDs.

Just one small word of caution. The vast majority of motors in use today are induction motors, but to achieve ever higher efficiencies, motor manufacturers are now offering new types, including permanent magnet and reluctance motors. If you are contemplating replacing an older motor with one of these, it is essential to confirm the compatibility of the control system and, if one is fitted, the VSD.

Whether you previously knew it or not, a large part of your electricity bill is almost certainly for energy consumed by motors. A little time spent measuring and monitoring the performance of your motor estate can therefore pave the way for very significant savings, which you will be able to quantify and confirm by continuing your monitoring after putting in place your energy saving measures!