Kiss from a rose 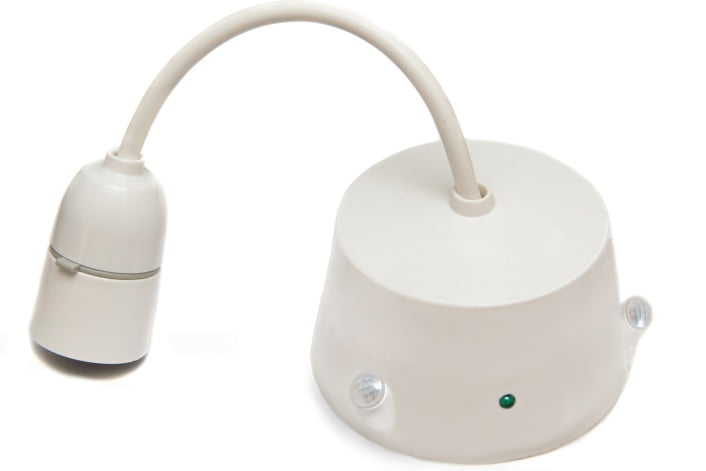 It all started with one man and an idea. An idea so simple (and brilliant) that it was assumed it had already been done. But, after much hard-work and perseverance, the world’s first BS67 smart ceiling rose was born. Having already received many accolades, as well as scooping ’Lighting Product of the Year’ at our very own ER Excellence Awards this May, here we tell the story of Adaptarose’s Moni Razzaque as we explore how he turned the ordinary into the innovative.

A common and unassuming sight in millions of homes across the globe, the humble ceiling rose has remained unchanged since Thomas Edison first patented the light bulb in 1879 – until now.

Lights left on in unoccupied spaces is a bad habit many of us are guilty of, and unfortunately carries a significant impact on our carbon emissions.

Typically, a traditional ceiling rose requires the operation of a wall switch to switch lights on or off. The smart ceiling rose, however, brainchild of Chartered Building Services Engineer (CIBSE) Moni Razzaque, switches lights automatically by overriding the wall switch.

A specialist in electrical engineering, Moni became fed up with his children always leaving lights on in his house – a common problem shared by many parents. Before Moni came up with his idea, he visited several hardware stores in search of something that would switch the lights off automatically to mitigate this problem.

He discovered that he could not find anything that would avoid rewiring, builders work and maintenance. So instead, he found himself improvising by cannibalising a PIR sensor from an outdoor patio light and rewiring its control facility back into a standard ceiling rose. With no pun intended, that was when he had his light bulb moment.

Despite the unsightly appearance of the crudely assembled device, Moni knew he had constructed an early prototype of the device he wanted. If used as a replacement ceiling rose in a retrofit, Moni’s creation would require no rewiring or builders work, and better still, once installed, would remain maintenance free.

(Surely) it’s been done before?

Confident he had stumbled onto a good thing, with much trepidation, Moni tabled his device complete with dangling wires in front of Les Norman, principal lecturer at London South Bank University (LSBU) and asked him for his opinion. Les Norman’s first remarks were, that the idea was so obvious he should check his invention with the patent office at the British Library IP office before wasting any more time.

He also suggested in the unlikely event it had not been patented, he could consider approaching the Carbon Trust for support to develop the idea further. Les Norman’s last piece of advice to Moni was to make sure any future patent should only be written by a patent lawyer.

So at Norman’s behest, Moni visited the Intellectual Property department at the British Library and met with information expert, Maria Lampert. Maria undertook a patent search lasting several weeks. Once she had completed her patent search, she called Moni back to the library and arranged for him to collect several folders containing all her findings.

Maria explained the documentation would normally be used by a patent lawyer should he decide to seek a patent. Those who had already seen the early prototype and shared the view that this was an obvious invention, were astonished to discover that in fact there was no UK patent for improving the BS67 ceiling rose. Armed with this information, Moni took heed of Les Norman’s advice and approached LondonIP, a patent attorney firm that worked closely with the patent office at the British Library to write the patent.

It took LondonIP several months of preparation before they could file a UK patent application titled, ‘Apparatus for improved ceiling roses’. Once the patent was filed, Moni approached the Carbon Trust and discovered they had an Entrepreneurs Fast Track (EFT) programme, designed to help entrepreneurs by incubating and investing in low carbon solutions.

To be eligible for this programme, Dave Raval former head of the EFT programme and current CEO of LoftZone, required Moni demonstrate that his invention could provide evidence of carbon reduction. To meet this requirement, he agreed with the Carbon Trust that he would provide evidence by conducting a field trial in his own home and then have the results independently validated by London South Bank University.

For the field trial Moni already had the perfect location in mind. This was the exact location that had inspired him to think about a solution in the first place: a section of corridor between his children’s bedrooms.

By connecting a data logger to an existing ceiling rose, he gathered a months’ worth of data before replacing it with his device. The actual energy saving in this location was staggering. In his first ever field trial he identified a saving of up to 173%.

He then submitted his data to LSBU for independent validation. The LSBU technical report concluded that whilst they did not doubt the data submitted by Moni, he had failed to explore the full potential of savings that could be achieved with the use of this smart ceiling rose.

The LSBU technical report raised an interesting question by asking readers of their report to ask themselves the following question: ‘In a transitory area of my home – say a hallway or a landing – how much time during the evening do I (or one of my family), actually walk through this hallway.’

Stop to think about the answer to that question yourself, and it is clear that any hallway or landing is unoccupied far more time than it is occupied – and this, is the potential of the savings for many homes.

In 2013 Moni was formally accepted into the Carbon Trusts EFT programme. For the following six months, the Carbon Trust commissioned various marketing studies. By the time the studies were complete, all the signs for the smart ceiling rose were clear. There was now overwhelming mounting evidence the low-cost solution with the smart ceiling rose could present a simple and practical opportunity for consumers to stop wasting energy and reduce utility bills.

A national Consumer Survey with 6,000 respondents stated 83% of consumers would have a propensity to purchase the device. If sold at a suitable Recommended Retail Price (RRP) of £29.99, the device would sell like smoke detectors. At this point, it was obvious the smart ceiling rose had retail opportunity potential.

A spanner in the works

Feeling deflated, Moni returned to Les Norman at LSBU for guidance. Norman suggested he could still build his prototype if he was prepared to fund it as a Product Design student’s final year project.

Moni agreed to the suggestion and LSBU introduced Moni to Miguel Ricciolini, a final year undergraduate. Together, over a period of nine months, Moni and Miguel designed and built the first fully functional 3D printed prototype and many others besides in anticipation of a field trial.

Power to the people

Eager to field trial the fully functional working prototypes, Moni approached his former local MP Heidi Alexander, who is currently deputy mayor of London. He made the offer of a free trial with volunteer households in the London Borough of Lewisham.

Heidi introduced Moni to Martin O’Brien, the sustainable resources group manager for the borough. Martin helped identify volunteer households from a list of householders who had lost out on a building insulation project due to insufficient funding.

For the field trial to proceed, Moni agreed to pay for the electrician’s costs and liability insurance. As a gesture of goodwill, the London Borough of Lewisham provided the data logging equipment like the one Moni had used earlier in his own home.

At the end of the field trial, Moni met with Miguel’s tutor Dr. Deborah Andrews from the LSBU Department of Engineering to analyse the data collected. Dr. Andrews, upon analysing the data, wrote a paper titled, ‘The design, development and testing of a bespoke ceiling rose motion sensor for use in domestic properties.’

In the paper, she deduced that the general trend was very positive, and calculated an average summer household energy saving of up to 4.3%. The paper recommended more extensive testing with more participants over a year would be beneficial; nevertheless, the potential energy saving benefits of the product had been identified.

In the five years it has taken to design, develop and test the prototype, Moni’s notable achievements to date include being recognised as a 2014 London Leader by the London Sustainable Development Commission (LSDC). The smart ceiling rose was also a finalist at the 2014 CIBSE Building Performance Awards under the Energy Saving Products category, and most recently won Lighting Product of the Year via an independent judging panel at the 2019 ER Excellence Awards.

When attending such awards, Moni said he felt like a ‘minnow in the electrical manufacturing industry’, but proud to be able to share a platform with other major manufacturers in the same category. But Moni certainly shouldn’t sell himself short, as thanks to his perseverance and faith in his invention, he has proven undoubtedly that when it comes to securing success, you don’t have to be the biggest fish in the pond.