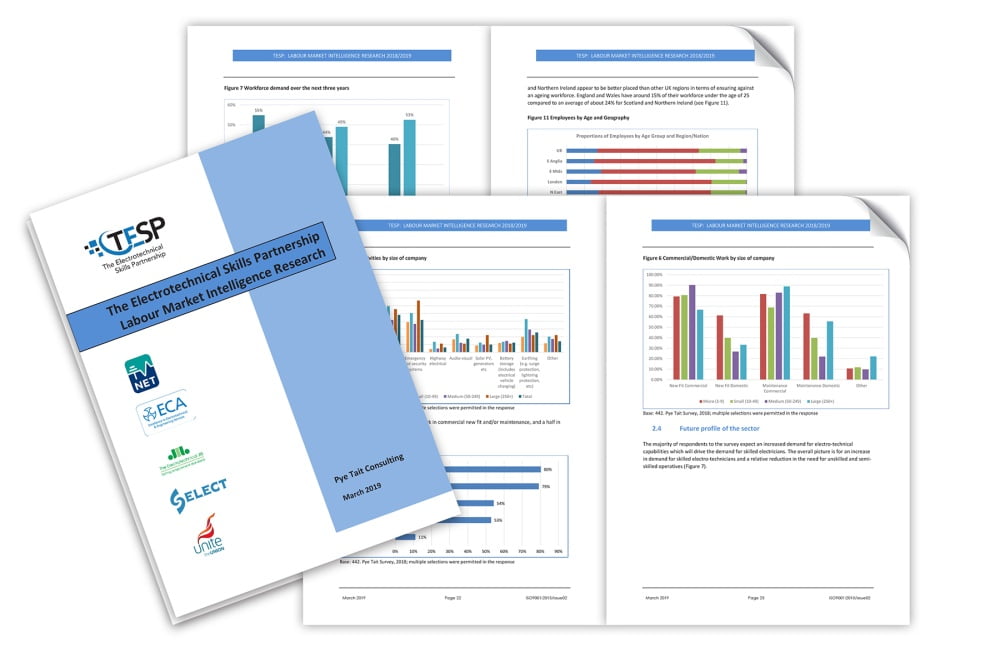 A new labour market report on the electrotechnical industry has estimated that between 12,500 and 15,000 additional skilled electricians will be needed over the next five years to accommodate forecasted growth.

Within this figure, the research suggests that even if an extra 5,000 new apprentices qualified by 2023 (representing a 33% increase), this would still leave a shortfall of 7,500-10,000 electricians needing to be sourced from elsewhere. These workforce predictions are based on meeting demands solely due to sector expansion and do not cover the additional staff turnover occurring from leavers and retirement.

Emerging and future technologies are expected to be major drivers for this increase in skills needs over the next decade, with SMART technology, e-mobility and Wi-Fi technology named as the top-three forces for change. Other areas that are likely to influence the sector include changes to regulations and public policy in areas such as energy efficiency and fire safety.

Whilst the largest proportion of the UK workforce is between 25 and 49 years old, England and Wales have only around 15% of their workforce under the age of 25, compared to 24% for Scotland and Northern Ireland.

The report confirmed that apprenticeships are still highly rated across the sector and, based on up-to-date calculations published in this research, there is clear potential for a return on investment for those who recruit apprentices.

However, the number of apprentices currently recruited each year is insufficient to meet projected demands and employers identify various barriers to further recruitment, including some candidates’ attitudes and behaviours. They believe more needs to be done to widen the potential pool of applicants and the calibre and diversity of new entrants, for example through improved industry engagement with colleges and schools, and further development of alternative routes into the industry for college leavers, career changers and others from older age groups.

In response to the report and its findings, TESP is now developing an industry action plan to tackle the issues and recommendations raised. Work is already under way in several areas, including the development of new careers resources, promotion of industry-recognised qualifications and activity to forge closer ties between industry, schools and further education. The action plan will also take account of the large numbers of small and micro businesses in the industry, including sole traders, and how these might be better supported in future.

Ruth Devine, chair of TESP and managing director of SJD Electrical, said, “The TESP survey – the first of its kind in over a decade – offers not only a useful snapshot of where the electrotechnical industry and its skills-base are now, but also a vital insight into the scale of the challenges we face in the immediate future. The organisations which form TESP all have a crucial part to play in shaping and coordinating the industry’s response to these challenges, and the priorities for action defined in the survey report represent an important first step. Future success will, however, also hinge on the active participation and support of other stakeholders, including government departments and agencies, clients, training providers, other sector bodies and of course individual businesses – especially the small and micro businesses who make up our industry’s core.”